I have been thinking of updating my blog to tell you how my bees overwintered and how they are doing now. But since the end of April that I opened the hives first time this year, I have been feeling guilty all the time that I have not got time to write about my bees. They do get the time they deserve from me to look after them, just I haven’t got time to write down their progress.

There were 3 full hives went into winter in 2015. We had a very mild winter. In fact I remember the bees were flying during the Christmas holidays. It was followed by the cold and late spring, but I hefted the hives, also put some fondant on the feeding hole, just in case they were starved. They never took the fondant though. I knew the verroa would be a problem since they probably never had a brood break due to the warm winter. So I was checking the verroa drops. Both Hive Judith(140/6) and Jen(240/6) had very high drops. And Hive Judith had very visible deformed wings. While Hive Yang had literally NO verroa drops. I didn’t quite understand: Hive Jen had a verroa drop of 40 a day and it was only early spring with a small bee population, there was no reason that it could be as strong as it was, with no visible deformed wings on the workers. I also don’t understand why Hive Yang had no verroa!

The first warm weekend at the end of April, I opened the hives in eager!

Hive Judith: badly infested by verroa, brood pattern was spotty and visible deformed wings on the combs. Only 4 frames of brood with lots of empty cells. Last 2 frames had no bees on them at all. They did not build up. This was the parent hive of all my other hives from in the last year and it was the strongest of all. I felt pitiful on them. They would not survive this winter…

Hive Jen: this was the one with 40 verroa drops a day. But it was strong, all the frames were covered by bees, lots of drone broods, they needed super immediately! So I added a super and the next week had to add another one because they filled a super in a week! Let me tell you why they were doing so well. I sampled the drone brood, they weren’t bad, a lot were free of verroa, quite a few had verroa, but really just one per drone larvae. I also saw the workers taking out infested drones. This must be the hygienic bees that groom themselves and can sense the infestation. They must be killing the verroa selectively. This explains the high drop but strong hive. I was very excited over this discovery. I had been looking forward to having bees with this trait! I’d better rear queens from this hive and replace the queens in the other hives. So excited!

Hive Yang: very few brood, very few eggs which were laid on the side of the cells. The queen was gone and it had laying workers! I didn’t want to give up on them, so gave them a frame of open brood from Hive Jen. And kept on doing so for the next 3 weeks. The laying workers were stubborn, they made no queen cells. At the end, I brushed all the bees in front of Hive Jen and took fresh frames from the other 2 hives. At the end of the week, they made 1 queen cell! See the photo of the bees balling in front of their new hive. they must thought the laying workers were their queens and balled up to protect them. They stayed like this for over a day, finally gave up, disappeared into their new hive and there were a few dead bees on the ground. Were they the laying workers? 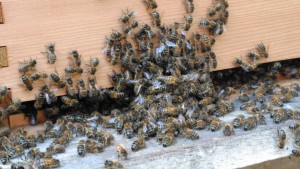 Looks like only Hive Jen will produce honey for this year. The new plan is to have modest honey crop but rear queens from Hive Jen and I need to have more than 3 hives to go into the winter. I look forward to the bees starting to make their queen cells. Said that, Hive Jen is a great hive, it is in June now at the time of writing, it has not made any queen cells yet. The meadow bees have their heads down and work hard to make honey.